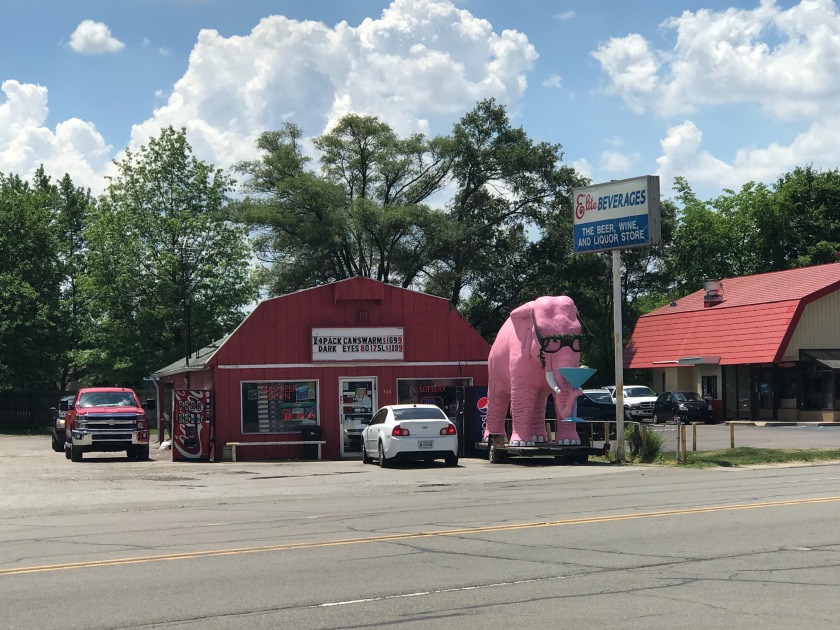 So, what do you do when you’re in a city that’s having a big race and you’re not going? Well, you jump in the jeep and check out small town Indiana!

Our first stop was in Fortville, at Elite Beverages to see the Pink Elephant. At 12 feet tall and 19 feet long, the pachyderm sits on a flat-bed trailer, wearing black-framed glasses, draped with an ivy vine, slipped down on the bridge of its nose, with its trunk wrapped around a martini glass.

I’ll bet you it’s not something you see everyday.

Since it was 90 degrees outside we decided to hit the drive thru at the DQ next door before heading to our next destination. A banana milkshake for me, and a small vanilla cone for Debbie, really hit the spot.

We then traveled to Alexandria, to see a true roadside attraction, The World’s Largest Ball of Paint. This bizarre artifact came into being in the late 70s when the “artist” let his son cover a baseball in paint. After that, they continued to add new layers, one over the other, causing the ball to slowly expand with each application. In the beginning, the ball would be painted multiple times a day, as it could simply be dipped in a can, or quickly brush painted, but as it continued to expand, becoming more unwieldy, the process began to take longer.

Eventually the owner was forced to build a barn just to house the ball with a specially constructed girder that could support the increasingly heavy paint ball, with funds for the construction provided by Sherwin Williams Paint Company. Today, after more than 26,000 coats of paint the ball weighs over two and a half tons. It has long since lost its spherical shape, taking on a more oval form due simply to gravity. Small imperfections have also grown into lumps, giving the paint ball the look of a large lemon hanging from a tree. 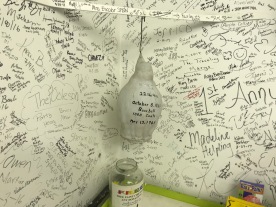 Signed the Wall of Fame

Signed the Wall of Fame 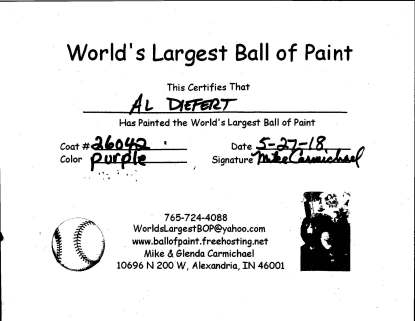 We added the 26,042nd coat to the ball and was given a certificate to acknowledge it. We also signed the wall of fame, so if you’re ever in the area, check it out and sign the wall as well.

It was a great day checking out small town America, and we can’t wait to do it again.