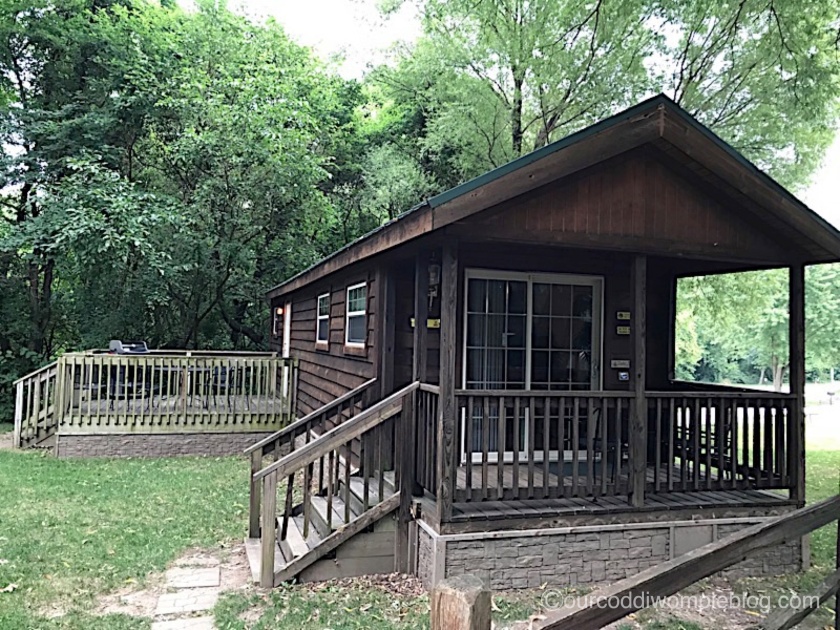 While in Illinois, I noticed the front cap molding was starting to pull away from the body on the driver’s side. I emailed my service rep at Newmar to see if there was any chance of getting a service appointment while we were passing through the area. (insert chuckle here)

The service rep replied to my email saying they were booked, and they were currently scheduling appointments for early December. However, there was a recommended service facility in Elkhart, and recommended I give them a call to see if they could fit us in.

I contacted Bryan at Custom RV Repairs and discussed our issues, and since we were going to be in his area for the week, wanted to know how much work he could handle since we had a “list” of items that needed to be fixed starting with replacing the toilet that broke when we were in Tucson, and I couldn’t get a replacement part so I ended replacing it with a temporary plastic toilet so we could continue our travels.

I also wanted the camera monitor on the dash replaced. It has been acting wonky since hitting a major pothole on our way to the Full Timers rally in New Mexico. It turns on and off without any rhyme or reason, and it sounds like a microphone is turned on because I can hear (loudly) when trucks or cars are passing me.

The next issue was to replace the bedroom slide out cover that I ripped off when trying to maneuver into the extremely tight spot at the Provo KOA. Needless to say, I was not a happy camper that night.

The last issue we had was the phantom leak from the shower that Newmar couldn’t find last year but has now started to swell the floor outside the bathroom.  And if all these items weren’t enough, and time permitted I wanted the roof sealants inspected, the AC units and furnace serviced, and the leveling system checked since I found some small hydraulic fluid drips lately. Bryan said they could handle everything on the list, and he would get started on ordering the necessary parts.

We were lucky that the KOA we were staying at was a Holiday park and they had a cabin with full kitchen and bathroom available for the week. Not knowing how long the repairs were going to take, we decided to keep the RV site reservation, and make another reservation for the cabin. It cost us a few pennies more, but it worked out great since we pulled into the KOA on Sunday, and we had that evening and morning to move things into the cabin before dropping the coach at Custom RV which was only 12 miles away.

When we dropped the coach off the next morning Bryan and I did a walk around the discuss the many items on the list, and I was told that everything was in except for the slide cover. The manufacturer sent the wrong one and the correct cover would arrive on Thursday. I wasn’t upset with the news, they had plenty of work to keep them busy until it arrived and especially since we added servicing the generator to the list.

During the week Bryan was calling me several times with progress updates. The first being on Monday night after looking at the front cap and he noticed that the front driver’s fender was being held on with only one screw. It seems that the road system in this country really took a toll on the coach, and the screws had either fell out, or broke off. To repair the issue, he replaced the screws and added more to beef up the structure, of both fenders. We also decided because of this that he should go over the entire structure and reseal all joints. When he inspected the roof sealants, he told me that I had no caulking around the skylights. This was something Newmar had done (or said they did) a year ago.

The phantom leak was not from the shower as we thought. It actually was from the refrigerator. When Bryan and his crew removed, repaired, and cleaned the entire area before reinstalling. They also did a quick fix on the vinyl floor that was peeling up. Bryan did call to ask me if Newmar gave us some flooring when we bought the coach, which they didn’t, but if they had he would have replaced the two sections.

So, we were “homeless” (not really) for the week, and between repairs and lodging cost spent a pretty penny. But when we got back on the road, on schedule, we had everything repaired or replaced, and the coach is running like its brand new again.

I cannot say enough good things about Bryan and his crew at Custom RV Repairs. They are not the type of service center that just replaces parts, they actually diagnose and look for the best solution to fix the issue. Case in point, the camera monitor didn’t require replacement, it was an issue with the settings that was causing the problem. It was hard for me to believe, and Bryan told me that we took the coach for a drive on a very bumpy road to make sure it stayed on, and sure enough it’s been working fine ever since we picked it up.

If you’re in the Elkhart Indiana area and need work done, give Bryan at Custom RV Repair a call. You won’t be disappointed.