Today we went on a driving tour of Cleveland. We try to do these types of tours in every city we visit so that we can get a real feel for the area and see a lot of different things since we sometimes don’t have a lot of time outside of work.

Our first stop was to the Lakeview Cemetery.  Major cities usually have some famous people in their cemeteries, and Lakeview did not disappoint us. We saw an eclectic group of famous people’s gravesites

Starting off with the James A Garfield memorial, which was dedicated in 1890, the memorial is a two story, tower-like building built in a number of Gothic and Classical styles. In addition to the elaborate architectural flourishes, the exterior of the building tells the former president’s life story via five terra cotta panels reliefs featuring over 110 life-size figures. The interior of the building features 14 stained-glass windows depicting the 13 original colonies plus Ohio, mosaics, and an oversized statue of the late politician.   It is also the only memorial that keeps the dead president on full display.Pretty elaborate for someone who only served 200 days in office. 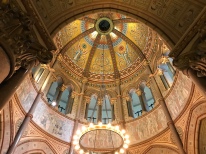 Statue of President James A. Garfield

We then saw the gravesite of John D Rockefeller, the business Magnate best known as the patriarch of the socially prominent Rockefeller family of New York, and founder of the Standard Oil Company and the Rockefeller Foundation.

Next was the marker for Eliot Ness, the FBI agent who brought gangster Al Capone to justice. The ashes of Eliot Ness, his wife and their son were scattered in the pond behind the marker.

Last but not least, the marker for Alan Freed, the disc jockey who coined the phrase, “Rock ’n’ Roll”. Freed was cremated and initially interred in a Westchester County, New York, mausoleum. His remains were then moved to the Rock and Roll Hall of Fame where they stayed for 12 years, and then to his final resting place at Cleveland’s Lake View Cemetery on May 7, 2016. His new contemporary gravestone tells his story, illustrated with a big ol’ jukebox on the back—a design suggested by musician and Freed fan Steven Van Zandt.

We then made our way over to the Public Square, where they were having the 5thAnnual Real Black Friday Expo. The event is a resource for small business owners and consumers who support black businesses in Cleveland. There were a lot of people there so parking was not an option, and with traffic being was very slow, we were able to drive a few laps around the square and see the Solders’ and Sailors’ Monument and Old Stone Church. 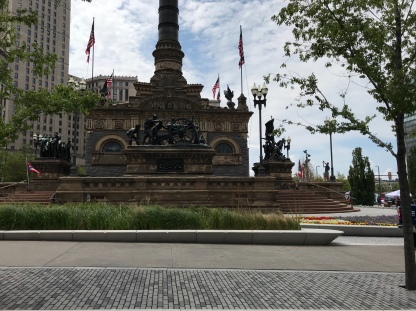 The Soldiers’ and Sailors’ Memorial is a comprehensive monument to the Civil War, and the only statue of Lincoln in which he carries a weapon. 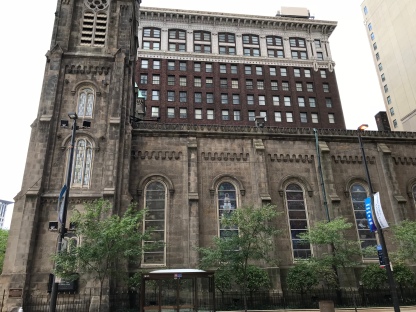 The Old Stone Church is a historic Presbyterian churchthat is the oldest building on Public Square. It is also the second church built within the city limits.

Before leaving the city, we drove past the home made famous by the 1983 holiday classic A Christmas Story. There’s a museum across the street that features a number of movie props such as little brother Randy’s snowsuit and all the toys from the department store window that Ralphie fawns over. Parking is not possible since this is a residential area curbside parking is used up by the local residents. So, if you can’t wait to watch A Christmas Story as it airs non-stop on cable this holiday, you can actually head to Cleveland and live the experience.

Leaving the city limits, we drove over to Rocky River Reservation to see some green spaces.Long and narrow, this reservation follows the winding course of the Rocky River from Berea almost to Lake Erie. The reservation includes a nature center, marina, stables, and three golf courses. Worth noting – the Rocky River itself is a top steelhead fishing location, noted as one of the 150 best fishing spots in the country. 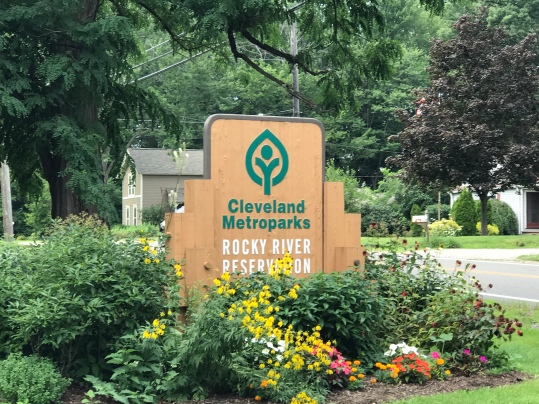 We then returned back to the campground just in time for happy hour with our new RVillage friends Mike and Gail. It was a great day of sightseeing, and the happy hour wasn’t bad either.

Next week is work as usual, and then on Saturday we continue east into Pennsylvania.