We stayed inside during the morning thunderstorms, but when the weather cleared up we took a drive north to Holland to check out the Windmill Island Gardens. which has an authentic working Dutch windmill named “De Zwaan” (the Swan) brought over from the Netherlands in 1964. The windmill, which reaches 125 feet from the ground to the top of the blades, towers over 36 acres of gardens, dikes, canals and picnic areas. 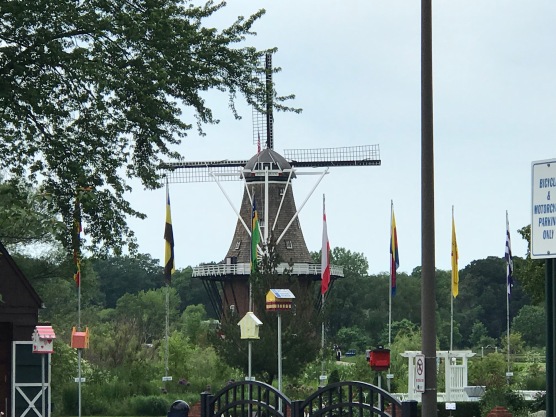 On the way back, we stopped in Douglas to see “New Singapore” another Abstract Obscura site.

Here’s how Abstract Obscura explains it ” Overlooking the protected waters of a small lake teased from the Kalamazoo River, one finds the marker honoring New Singapore and a remarkable rescue of its citizens. This rescue would not have been possible without the domestication of the wonderful creatures known as water moles who had the ability to tunnel through water. As they did so, they secreted a mucus that hardened on contact with water–allowing air to get to people at the bottom of the ocean–or in this case–lake. It was reyaksu (the name for a type of such tunnels) that made the rescue successful.

This site also gives one a bit of a sense of the many threads of history weaving through Aywatin gwome. (Gwome is a Cognate word meaning “footprint of the nation.”). Though Minotsuna Tano and Forrest Bess may have been prominent visitors who made it their home–willingly or unwillingly–there were many other forces at work in the community. New Singapore was just one of the gwome’s power centers–and the Geraldines made them even more fearsome.”

I don’t fully understand the reasoning but these Kcymaerxthaere markers are throughout the country. Strange.

The marker is right next to the little lighthouse. If it wasn’t for Atlas Obscura, we probably wouldn’t even notice it.

Tugboat tied up on Kalamazoo River 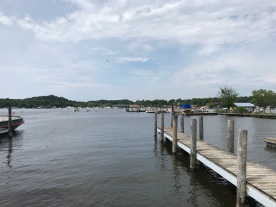