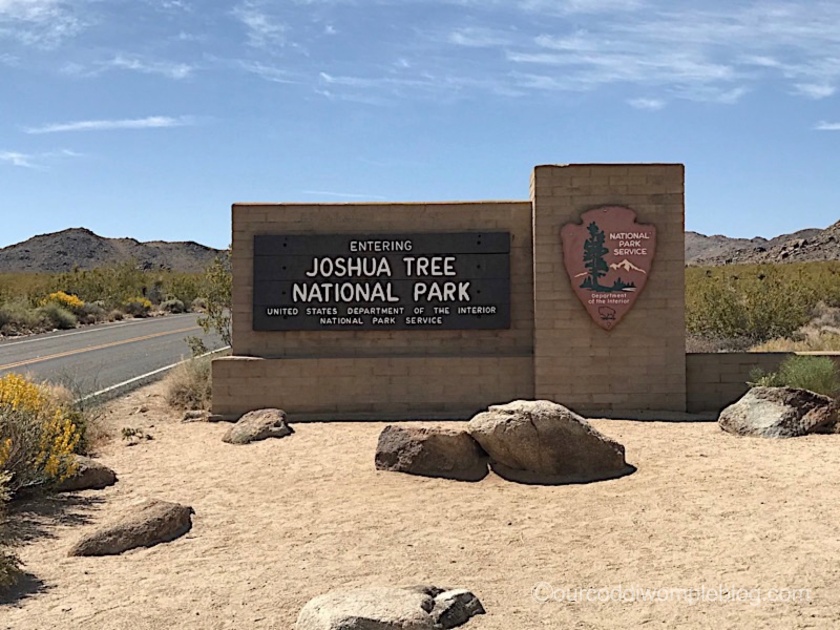 It’s hard to describe the park. If it wasn’t for the other “humans”, you would swear you were on another planet.

The National Park website describes the park, and the Joshua Tree, as “Two distinct desert ecosystems, the Mojave and the Colorado, come together in Joshua Tree National Park. A fascinating variety of plants and animals make their homes in a land sculpted by strong winds and occasional torrents of rain. Dark night skies, a rich cultural history, and surreal geologic features add to the wonder of this vast wilderness in southern California.

The Joshua tree, Yucca brevifolia, is a member of the Agave family. (Until recently, it was considered a giant member of the Lily family, but DNA studies led to the division of that formerly huge family into 40 distinct plant families.) Like the California fan palm, Washingtonia filifera, the Joshua tree is a monocot, in the subgroup of flowering plants that also includes grasses and orchids. “

Years ago, the Joshua tree was recognized by American Indians for its useful properties: tough leaves were worked into baskets and sandals, and flower buds and raw or roasted seeds made a healthy addition to the diet. The local Cahuilla have long referred to the tree as “hunuvat chiy’a” or “humwichawa;” both names are used by a few elders fluent in the language.

By the mid-19th century, Mormon immigrants had made their way across the Colorado River. Legend has it that these pioneers named the tree after the biblical figure, Joshua, seeing the limbs of the tree as outstretched in supplication, guiding the travelers westward. Concurrent with Mormon settlers, ranchers and miners arrived in the high desert with high hopes of raising cattle and digging for gold. These homesteaders used the Joshua tree’s limbs and trunks for fencing and corrals. Miners found a source of fuel for the steam engines used in processing ore.”

All in all, we really enjoyed visiting the park. Our next stop is the Grand Canyon, which should be equally enjoyable.