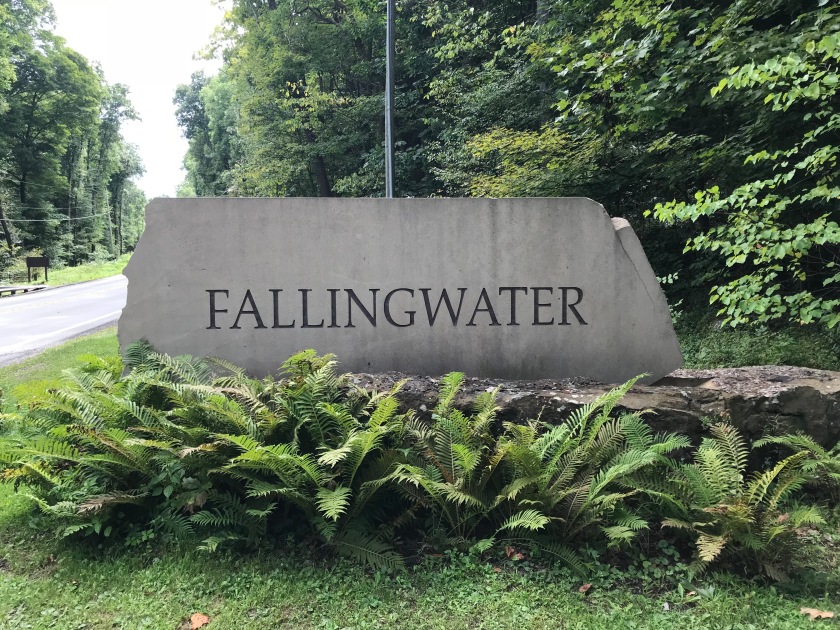 Our first stop was Fallingwater, designed by Wright for the Kaufmann family, owner of Kaufmann’s Department Store of Pittsburgh.

Construction of Fallingwater was completed in the fall of 1937, and the Kaufmann family began using their weekend retreat to share the home and explore its surroundings with friends—long hikes through the woods, refreshing plunges under the falls, and reading or dining al fresco. Such was Fallingwater’s popularity that in 1939 a guest house, with outdoor pool, was connected to the main house by a cascading concrete canopy.

Fallingwater was opened for public tours in 1964 and saw 29,792 visitors its first season. Steadily increasing since, annual visitation now exceeds 180,000 with over 5.7 million people touring the Kaufmann’s weekend retreat, a house designed for a family of three.

In 1976, Fallingwater became a National Historic Landmark, the same year as Frank Lloyd Wright’s home and studio in Oak Park, Illinois, and Taliesin, his home and school in Spring Green, Wisconsin. In 2000, it was named a Commonwealth Treasure by the Pennsylvania Historic and Museum Commission, and in 2015 joined nine Frank Lloyd Wright buildings across the United States in a bid for World Heritage List inscription by the United Nations Educational, Scientific, and Cultural Organization (UNESCO).

Photography is not allowed during the tour and unfortunately, I could not sneak any. For more information visit their website. If you’re in the area, we highly recommend taking this hour-long tour, and wear comfortable shoes as it is a ¼ mile walk from the visitor’s center to where the tour starts.

We then traveled a short distance south of Fallingwater to Kentuck Knob, an excellent illustration of Frank Lloyd Wright’s Usonian architecture.In 1953, Bernardine and I.N. Hagan purchased eighty acres in the mountains above Uniontown in Western Pennsylvania where their families had lived for generations. After falling in love with the home of their friends the Kaufmanns, Fallingwater, they asked Frank Lloyd Wright to design a house for them. Construction began in the early 1950’s, and the Hagans moved into the home on 29, July 1956—their 26th wedding anniversary, and spent thirty years at Kentuck Knob. After I. N. fell ill, the Hagans could no longer remain on the mountain, so they sold the house in 1986 to Lord Palumbo of England, who at the time was visiting Fallingwater and heard about a Wright house in the area that was for sale. Our tour guide was very knowledgeable and explained the house, it’s owners, and Frank Lloyd Wright’s Usonian architecture.  The regular house tour is approximately 45 minutes in length and does not include any stair climbing except for four small steps to enter the home.

A tour bus drives you from the visitor’s center to the house and back. You can also take a 15-minute walk back on the nature trail and see some sculptures owned by of Lord Palumbo.

bird houses at the visitor center

As with Fallingwater, interior photography is not permitted during the tours. However, unlike Fallingwater, I was able to get a couple of pictures from looking in the windows from the outside. 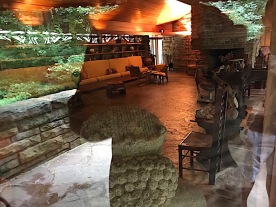 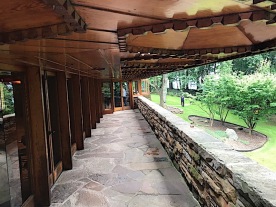 After leaving Kentuk Knob we drove the back roads (up and down) the Laurel Highlands to Polymath Park, where there are three houses, one designed by Frank Lloyd Wright, and two designed by his apprentice, Peter Berndston.  Unlike Fallingwater and Kentuk Knob, photography is allowed inside all three homes. Also, you can stay in all three homes overnight.

​Designed by Frank Lloyd Wright, built in 1957, The Wright-designed home was saved and dismantled from its original location in Lisle, Ill., and in 2007 relocated to Polymath Park.The house is furnished with Mid-Century Modern furnishings from the original owner, including the pots and pans hanging in the kitchen. 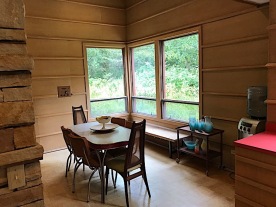 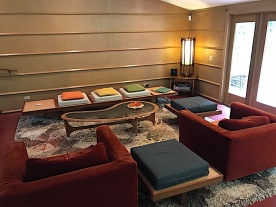 Peter Berndtson designed as a summer house for the Balter family, successful business owners from Pittsburgh who purchased the original property with the Blum family. The Balter House has the familiar “Cherokee Red” concrete floors, notable in Wright’s Usonian Houses.

The interior and exterior of the house is comprised of California Redwood, vertically placed board and batten. The exposed redwood beams, and roof ridge skylights, heighten the aspects of the house. The large stone fireplace that is the masonry core of the Living Space boasts a dry stack formation using the sandstone harvested on the property. The house is set within the edge of the forest, overlooking a series of large boulders.

The smallest of the three houses at just 1,500 SF, Peter Berndston designed as a summer house for the Blum family, successful business owners from Pittsburgh who purchased the original property with the Balter family.

Upon entering the Blum house, you step on the familiar “Cherokee Red” concrete floors. You will experience a compress and release as you enter the Living Space and gaze through the wall of glass to the meadow and view of the Chestnut Ridge Mountains in the distance. The house boasts a beautiful stone fireplace, harvested from the property, and placed in a dry stack formation. The windows and skylight allow in the natural light and cast geometric shadows throughout the house. 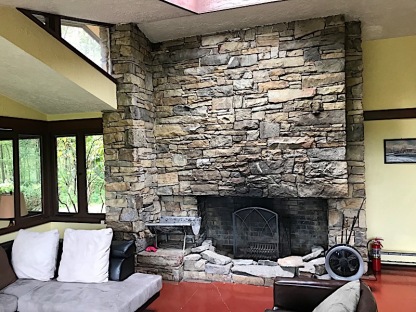 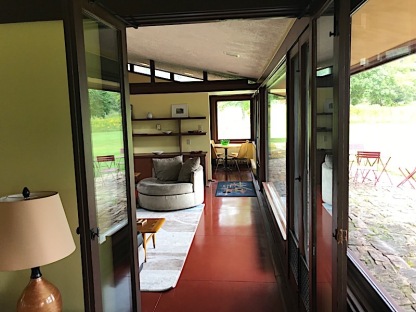 We had a great time touring these houses and celebrating Debbie’s birthday.

We’ll continue eastward and after an overnight stop at a Walmart, we’ll be back in New Jersey, for family, friend, and doctor visits, motorhome service, and to celebrate our first anniversary as full timers.

Should be fun, so stay tuned.