It turns out there isn’t much to say about Angola Indiana (pop. 8,600+/-) It was a nice place to stop and work for the week. Circle B Campground is a nice campground and very well maintained. Other than working, we made a two trips to Walmart for supplies and groceries, and went out to dinner one night.

The campground is adjacent to Hogback Lake.

Outside of the campground, across the highway, there is a small airport. Our first night while sitting outside we watched a couple of skydivers come in for a landing.

We also enjoyed our first campfire as full timers! 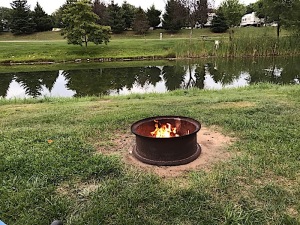 Leaving Angola we began our 1,109 mile “Run to South Dakota”

Our first stop was Hickory Hollow Campground in North Utica Illinois. It was a rough start to the trip with all of the construction on Route 80, not to mention the major accident that caused a 10-mile backup. But we eventually arrived safely and was able to rest for the night.

Hickory Hollow is a nice, small, campground. A lot of our neighbors were there for the wine tasting festival that was taking place nearby. Unfortunately our schedule did not allow us to partake and the next morning we were back on the road to our next stop at the KOA campground in Waterloo Iowa.

We were really impressed with KOA Waterloo. It’s like no other KOA campground we’ve ever visited. The cost was very low compared to most KOA’s and there were a lot of amenities. If we’re ever back in the area we will definitely stay here again.

The next day, we had our longest drive of the trip, 312 miles. The reason it was so long was because I could find a “decent” campground that was open in Minnesota so we pushed on to Sioux Falls, South Dakota, and stopped at the KOA campground. This KOA is very different from Waterloo, no amenities, and considerably more expensive. What a different a day makes!

The next day, another 231 miles later, we stopped at yet another KOA campground in Midland, South Dakota. This campground was nicer than Sioux Falls, cheaper, and the staff was very friendly.

Outside of the campground is the 1880’s town. A replica of what it was like to live in the 1880’s. and it also had some of the movie props from the movie Dances with Wolves. We stopped on our way out of town to take a look. 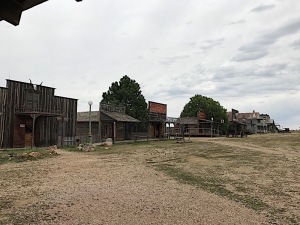 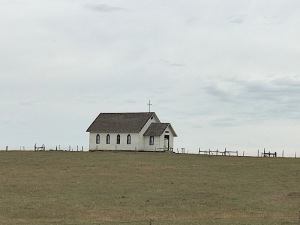 Once we hit the road it was a short 110 mile run to our final destination in Box Elder South Dakota. Unfortunately the weather wasn’t cooperative and the 30 MPH crosswinds made it rough going to keep the motorhome on the road. But eventually we made it.  White knuckles and all.

In order to change our residency, we are required to stay at least one night in South Dakota. Our mail forwarding service, Americas Mailbox, has a small campground just for this reason. It’s nothing spectacular, really just a parking lot, but it makes the process go a lot smoother since they have all the forms and explain exactly what we needed to do. The staff here is fantastic!

With our forms and identification in hand we set out the next day to get our new licenses. We were amazed how efficient South Dakota DMV is. Coming from New Jersey, where everyone dreads going to the DMV, we were amazed when we walked out after only 10 minutes with new licenses in hand. We are officially residents of South Dakota!!

And, as new residents of the great state of South Dakota, what does one do first? Why you go to Mount Rushmore! 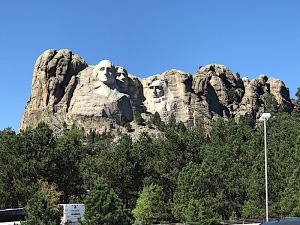 And the Crazy Horse Memorial!

and to Custer State Park to check out the buffalo! 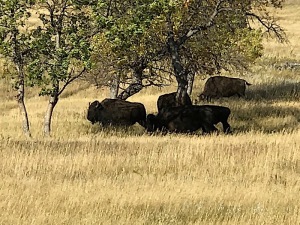 Unfortunately, we only had one day to play tourist because I’m back to work for a couple of days before we leave to head south.

We did learn a couple of lessons on this trip west. The first being we shouldn’t try to go more than 200 – 225 miles a day, even if there’s no decent campgrounds we need to stop somewhere because the miles take their toll after a while. The second lesson is not to travel so many days in a row. The first lesson we won’t be able to do anything about until after next year because we have reservations already in place up to January. However, the second lesson we can accomplish because from now on we will only be traveling on Saturdays and Sundays, and parking for the entire week so I can work (to pay for this adventure.)

Our next stop is Nebraska. Until then,