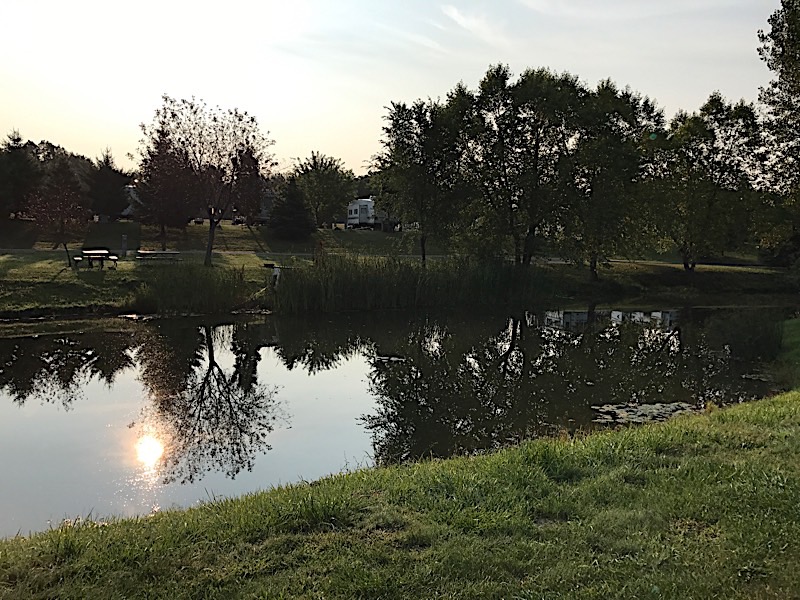 We are now three days into our new life as full-timers. We’ve driven 679 miles and are currently in Angola Indiana at the Circle B RV Park and Cabins on Hogback Lake.

Before leaving New Jersey, it was a made dash go buy our new tow vehicle. We were looking for a two-door Jeep Wrangler, but unfortunately the dealer only had six on their lot, and none of them had the options we wanted. I even stepped outside and called another dealer in the area and was told they only had one model on the lot and it didn’t even come close to what we wanted. So back inside, the dealer had a four-door Wrangler Unlimited with the options we wanted, plus a few more. The dealer knew our story since we have been there looking twice before, and eventually dropped the price down considerably to meet our budget. Since we didn’t have time to install the tow bar and base plate, Debbie will be following behind the motorhome until we get to Galveston.

The night before we left, our good friend Jim and Kim Matthews came over for drinks and brought us a great housewarming gift. I did get a picture of the gift but forgot to get pictures of Jim and Kim (Sorry guys). The next time we are in the area we’ll have to make sure to take pictures before we start drinking.

We left Friday morning around 10 am and traveled 179 miles to our first stop in Bloomsburg PA at the Indian Head Campground . This is an old campground and we were kinda glad it was only for one night. The only highpoint of the stop was having dinner with my old Navy buddy Jody Voorhees, and his girlfriend Shirley Murphy. We had a really great time and hope to see them both at a National Park someday. Thanks for the travel gifts Jody and Shirley, we’ll definitely use them to get “toasted”, and have already put up the sign!

On Saturday, we traveled west on Route 80 another 222 miles to Mercer PA and stopped at the KOA Mercer/Grove City Campground.  No fancy happy hours or dinners here, which was a shame because the campsite was a huge pull though and we could a fit in a few more cars. A couple of the neighbors did stop by and asked us about our motorhome which made us feel good. All in all it was a quiet evening relaxing before our most grueling travel day of the trip.

When planning out this trip, there wasn’t too many campgrounds west of Sandusky Ohio, so we decided to push it all the way to Indiana. We were up at the crack of dawn, and pulled out at around 8:30 in the morning. Our first stop was for gas at the Flying J truck stop about 25 miles from the campground. It was our first time refueling at a truck stop, and they have special RV lanes which really made it easy getting in and out.

Leaving Flying J, we had to make a stop to correct the GPS because  preloaded the trip as Mercer PA to Angola IN. Since I didn’t turn it on until we were leaving Flying J, it kept telling me (at each exit) to turn around and go back to Mercer PA. It was quite annoying, but I reprogrammed the destination, and after 279 miles we arrived in Angola around 2:30 in the afternoon.

Circle B is a really nice campground which is good since we’ll be here all week while I work. I’ll post more on the campground and local area in before we leave. For now, here’s the view from my office.