May 29, 2016 Our Coddiwomple Blog Attractions 2 comments

We left Cape May for a quick 105 mile trip to Tom’s Cove Park in Chincoteague Virginia. In order to do so, we first had to put the coach onto the Cape May / Lewes Delaware ferry. The ferry is about 85 minutes and cuts out driving 165 miles if we drove up to the Delaware Memorial Bridge, and back down Rt. 13.  The crew really knows how to fill the boat and did a great job making sure I didn’t scratch the coach. Here’s the video of us pulling onto the ferry.

Once all of the cars and trucks were aboard it was extremely tight and there wasn’t enough room next to us to open the door so we could walk around on the upper deck. It didn’t matter, with a coach as comfortable as ours it was nice to recline back and rest for the hour+.

Departing was just as easy as boarding, the spotter made sure no one was on my curbside so I could move a little to the right as I exited. A few hours later, after picking up the rental car, we arrived at Tom’s Cove Park. Honestly, after reading so many good things  about the park, I was a little apprehensive when we first pulled in a passed sections of run down sections of park model RV’s. However, the office staff was very nice and accommodating, and let us pick which site we wanted. It has been raining here for several days and I was told which two sites would be  best since the fields were very soft and muddy. Normally I would rate the campgrounds we stay at, but in this case since we were only here for two days, I will hold off until we stay here again (if we do comeback)

The only drawback to Tom’s Cove, which wasn’t their fault, was the lack of satellite service. I think it was mainly due to the tree right next to the coach. Luckily I was able to raise the over the air antenna and pick up a few channels from Norfolk (50 miles away). On a good note, our site was right across from the fishing pier and there was no one in front of us. There was a lot of ducks and egrets, as well as a real working lighthouse!

The next morning, after hanging out a bit, we drove over to Mr. Baldy’s Family Restaurant for lunch.  Mr. Baldy’s is a small, local, restaurant with a Yelp score of  3.5 stars. We thought the food was ok, but overpriced. We then a drive around Chincoteague, checking out all of the houses and park. The area is not that big so it didn’t take us very long and eventually made it to the dockside for our 3:00PM reservation for Captain Dan’s Around the Island Boat Tour

If your ever in this area, we highly recommend taking this tour. it’s a 2.5 hour pontoon boat tour of the entire island, focusing on the history of the island, as well as the horses. (which is the main reason we came to Chincoteague). If you do take the tour, make sure you make a reservation since space is limited to only six people per tour.

As you can see, Captain Dan gets the boat really close to the edge of the island so everyone can get a good look (and take pictures). 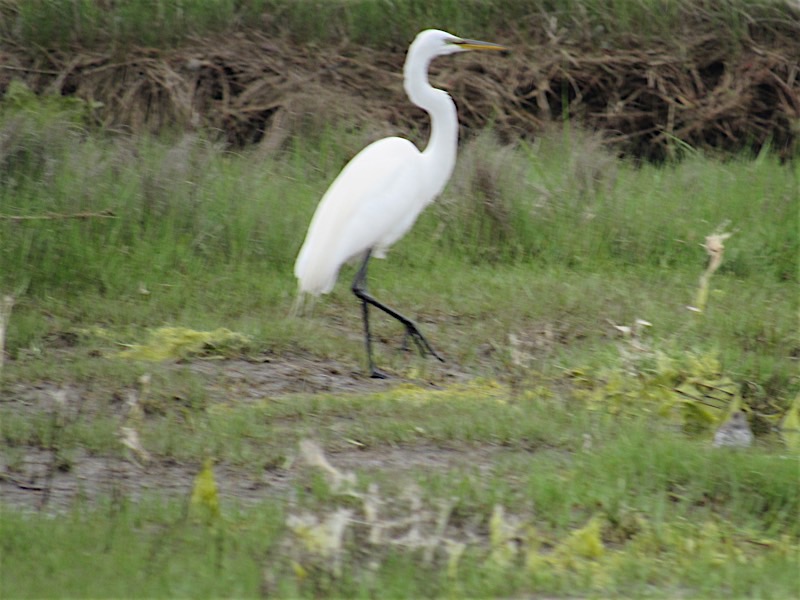 We really enjoyed our day at Chincoteague. Tomorrow we continue south towards the Outer Banks with a trip across the Bay Bridge Tunnel. Hopefully the winds will be calm and we won’t go swimming 🙂