After a good night’s sleep, we headed over to Weston to check out the Trans Allegheny Lunatic Asylum. The asylum doesn’t open until noon, so we stopped in at the Second and Center Cafe for a quick lunch. The cafe is named for it’s location in town (it’s located on the corner of Second Street and Center Street). The food is very good. They bake their own bread onsite, and have homemade peanut butter and chocolate chip cookies for dessert. YUM. 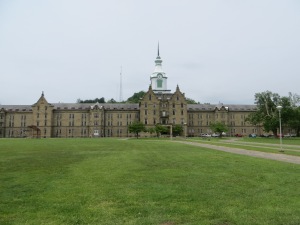 After the great lunch, we were excited to check out the asylum. According to their website, “the asylum was formally known as the Weston State Hospital and served the mentally ill in the mid-1800’s. The history of the building holds fascinating stories of civil war raids, a gold robbery, the “curative” effects of architecture, and the efforts of determined individuals to help better the lives of the mentally ill.”

When we arrived at the from door of the asylum we were greeted by an overwhelming antiseptic odor. One of the four staff members (two tour guides and two “nurses”) just finished mopping the floor and was quite liberal on the Pine-Sol. Within a few minutes the strong odor was giving both of us a headache.

The nurse informed us that we just missed the tour and would have to wait an hour for the next one. And, we weren’t allowed to walk around the first floor, where the tour was going to be, unless we paid the $10 fee (the cost of the tour goes towards the building’s restoration). We did, and then had to complete release of liability form on their computer in case we got hurt on the tour. We learned that the asylum was operating up to the mid 1980’s before it was closed down. By now our headaches were getting worse, and so far we weren’t impressed with the place, so we decided to take a look at the rooms we were allowed to see on the first floor and duck out before the tour started.

On our way back to Briar Point, we had to make a stop at Walmart because I left the water regulator at the last campground. We also picked up some food for dinner, instead of going out, and called it a day. Our beverages were calling us.